I had the pleasure of chatting again with Jonathan Green and a panel of guests on Radio National’s Blueprint for Living. The session was all about serenity, and I was alongside two other presenters based in Melbourne: one discussing the Japanese garden, and the other architectural design. You can find the download link here.

Perhaps unsurprisingly, the conversation became a bit of a dichotomy between the natural and urbanised environments. The beach, of course, predominantly is considered a very natural environment – as I mentioned in the conversation, even at a beach like Surfers Paradise (Gold Coast), it’s possible to turn your back on the highrises and put your feet in the water. 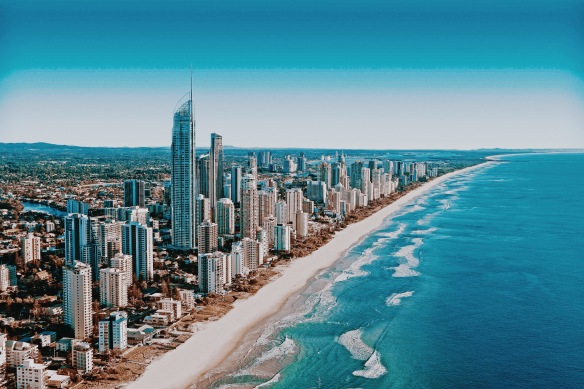 I had a few other points that didn’t make it into the conversation. I wonder if the technologically unfriendly environment of the beach makes it easier to embrace being in the moment? For instance, although I often see people with their phones on the sand, it’s very uncommon to see someone take a phone into the ocean! Is there a type of forced mindfulness perhaps that happens in a place where our devices are not comfortably accommodated?

Although I’m not a surfer, representations of surfing often suggest a type of tranquility or serenity on the waves. Douglas Booth (2001) discusses the concept of ‘soul surfing’ in his text Australian Beach Cultures, which he classed as a rejection of ‘high consumption, materialism and competition’ (Booth 2001, 113). I would suggest a work like Tim Winton’s Breath (2008) captures some of this sense of the serenity that surfing can provide – although, of course, it is not without its complications in that novel.

I've mentioned one of Australia's most iconic authors, Tim Winton, before. He's written a number of books that heavily feature the beach, and Winton himself regularly notes the role the landscape plays in his life. Winton's characters often use the beach as a touchstone, or a place that provides comfort and safety. We see this in his 2008 novel, 'Breath'. The protagonist Bruce finds relief through surfing all through his life, using it as a way to regain perspective and experience a brief reprieve from his daily life. #AustralianBeachspace 📷@maxwell_sound

Ultimately, however, as I said in the interview, perhaps the point of the beach for many people is that it is a place we go when we are looking to get away from our normal, everyday life. As such, it has its own routines and normalities that aren’t part of our ordinary patterns. Going to the beach is supposed to be easy: you can just spend hours on a beach towel, swimming, reapplying sunscreen. Of course, I think this is why it can be so startling when the serenity is interrupted – say, by a shark alarm. There is, after all, a dark side to the beach too!